We’ve done a slow, under-the-radar sort of launch for our Kintsugi collection of repaired ‘broken pearls’ but now is the time to tell all.

Maybe three years ago I was at a Hong Kong Gem Show and discovered the existence of broken pearls after finding a bag of all sorts of non-mainstream pearls at the back of a tiny stall featuring a mix of different sea pearls. 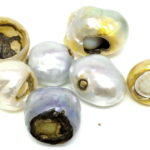 Intrigued, I sat down and started to go through the bag (it had well over a thousand pearls in it). There were tiny little round gold and white and pink, and blue and green south sea pearls, no bigger than 6mm. there were various keishi and there were these weird big and small pearls with missing nacre, some with huge holes in them, so you could see the nucleus, or the hole was full of concholin, layer on layer showing like the rings in a tree, or the pearl was hollow. No nucleus no anything. Just a nacre shell and a big hole. They were fascinating. The sort of pearls – lumps of nacre really – which shouted ‘take me home and let loose your imagination’. So of course I did. 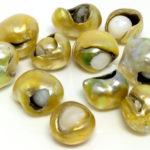 The bag of mixed pearls, all south sea of various colours, sat on my workbench for months. Periodically I tipped them out and looked at them. They looked right back at me.

Then I went to Bangkok and found a supplier of gold leaf (in Buddhist temples – as a way of offering – you buy a tiny ‘page’ and apply it to a statue). Again, I was intrigued and bought some. I had a vague idea that I would apply some to a statue at home and that would be a nice thing to do.

I never got around to doing that. The leaves of gold leaf sat on my workbench. The bag of broken pearls sat on my workbench. I had an ‘ahhhhh’ moment and the Kintsugi collection was a glint in my eye. No more than that as I had no idea how to fix the gold leaf to the pearls. I had bought some size, the traditional glue for gold leaf. It’s a treacly goo. I tried that. Total disaster. The inside of one hollow pearl became a mud mix of gold and goo which never dried. Finally I worked out how to apply the gold leaf, how to make it adhere and how to seal it.

Big gold South Sea half pearls with thick gold leaf to the front.

On the way I’ve got much better at handling the gold leaf, which is so fine and light it will waft off and fly around if you so much as breathe on it. There’s times when, unknowingly, I’ve walked around with a gold tip to my nose. Whenever I’ve worked on it I certainly get gold fingers and gold fingernails.

The collection was called the broken collection (no…), the gold leaf collection (a bit of a jam pot label name) until a website reader said that the technique reminded her of the Japanese art of Kintsugi. What was Kintsugi (isn’t google wonderful!) We had a name. Perfect. 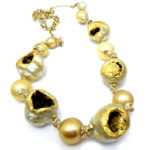 Necklace of gold South Sea pearls, these were mostly hollow.

So now, after much experimentation, perspiration and fun in the designing and making, the collection is here. 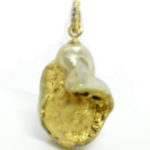 Lavish gold leaf on this gold South Sea pearl. Sometimes you look at the pearl and wonder..what happened here?