Nearly every pearl available anywhere in the world is farmed – cultured. Pearl farms tend to be stunningly beautiful places. 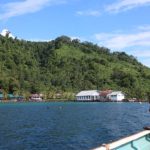 A false pearl bead manufactured by coating the inside of a hollow glass sphere or the outside of a solid glass or plastic sphere with a pearlescent coating which is sometimes pearl powder. Faux is a fancy word for fake. Also called shell pearls. They are of course perfectly round in shape, with great lustre and even colour. White shell pearls are very white, which is a give-away. All fake pearls feel smooth when rubbed on the teeth and the drill holes tend to be larger.

There is a young but growing pearl industry in Fiji, and the pearls produced have a huge and stunning range of colours, mostly shifted away from typical Tahitian colours into the chocolates and earthy shades

A pearl grown in a freshwater river, lake or pond margaritifera mollusc. Often more irregular in shape and more varied in colour than salt water pearls freshwater molluscs are nucleated by creating a small incision in the fleshy mantle tissue and inserting a piece of mantle tissue from another mussel. This process may be completed 25 times on either side of the mantle, producing up to 50 pearls at a time. The molluscs are then returned to their freshwater environment where they are tended for 2-6 years. The resulting pearls are of solid nacre, but without a bead nucleus to guide the growth process, the pearls are rarely round.

It’s always nice to get praise, so we are basking fit to tan today with this email from a long time pearl lover and customer ‘ Thank you so much – I am absolutely delighted with my new pearls – Ithey are the most beautiful….I love the colour variation….It is as if I am wearing a ray of sunshine around my neck’

The pearls – south seas – came from two strands I found during my last trip to Hong Kong. They were huge roundish golds of all shades and whites and as soon as I saw them I thought of this particular customer and snapped them up. I knew she would love them.

Here they are as strands, photographed in Hong Kong, at the wholesalers.

Huge 17mm gold south sea with some whites in one of the strands. Great colour and lustre

and here they are, blended into one 55cm necklace

Very satisfying to have a happy customer

A busy and successful day. Started with a visit to the main findings house, where an hour or so of browsing the many tiny drawers produces the stash of gold and silver to enable the making for the next few months. Thank the gods of jewellery that the price of gold has dropped. Plus I was able to get just about everything I had on the list. It’s so much easier to shop for findings in a cool atmosphere (literally, with aircon plus only me in the sales room)while the stand at the show is chaotic. I’ve never seen fights break out but there is some serious elbow action and shoving as peeps jostle to get to find the right tiny packets. One person came in while I was there, prowled around the room asked if they were going to be out at the airport for the show and then left…why would anyone do that? I was able to chat to the super knowledgeable staff and get some very good suggestions on what to use to achieve what I wanted. No chance of that with the scrum at the show.

It’s always so much more relaxed and friendly and calm at the offices before the show. Plus you get the chance to really poke around and find the good stuff.

After a couple of hours there I moved on to my favourite supplier of south sea and tahitian pearls. I was looking for some gold half drilled drops but no joy – no decent pairs for earrings. But I did find some lovely strands, including these two, at up to 17mm.

Huge 17mm gold south sea with some whites in one of the strands. Great colour and lustre

These two are both natural colour different gold shades with some white in one of the strands. They are huge – up to 17mm – with great colour and lustre. Yes, flaws but otherwise, wowser!

Looking through the stocks in the wholesalers vault I spotted this collection of loose single undrilleds. Including bags of dyed gold south seas. Yuck. Whether they are dying freshwater or south sea to look like the rich high end golds, the colours are invariably horrible ear-was tones. Do not be fooled.

It’s pretty easy to see which packets have the dyed gold south sea. Look for the extreme ear-wax tones

I’m afraid I passed on the tahitians. just didn’t get excited by them, though there were plenty.

Finally..a shot of the street outside the South Sea wholesalers. All tall buildings and a throng of people.

I’m having a break on Tuesday, then the show opens tomorrow – lots of photos!

Started the day by calling back to the first office to pay for (ouch) and collect my stash. I picked up some classic white metallic round strands…’double-double’ shiny AAA with matching pairs of half drilleds. A special request. Plus I was wearing a pair of big pink drops from here and succumbed to a few more pairs.

Having paid I quickly escaped before I could be tempted yet more. I went to the office of a big supplier, from whom I had bought in the past. But their behaviour last year and this means I won’t be going there again. Several staff members carefully ignored several customers and left us to one new employee who had been there under a week.  i found one paIr of souffle pearls and played with some 10mm natural colours AAA rounds but found no pairs.

These souffles were shiny but the colour was a bit weak.

I (and the other customers felt so dismayed we didn’t buy anything. Never iond. This company is, as far as I know, a main supplier for a big company so we small fry are not important.

Feeling glum I went finally to my favourite south sea supplier. Dark tahitians were muddy but I found some lush lighter multicoloured rounds and baroques.

lighter shades of tahitians were much more attractive than darks, which looked muddy

And some fun gold south sea ripples. Just the one strand. These aren’t just baroques, they really are like ripples. In spite of poking though every tray of pearls I could not find any other similar stands

Is this the first ever gold south sea ripple strand?

Finally, some big tahitian buttons which will make amazing earrings